Running fast has been described as poetry in motion. When you see a truly fast sprinter storm down the track, words that often come to mind is effortless, relaxed, smooth. It is a deceptive view when you see an actual world class sprinter because it is often defined as “controlled chaos.” Sprinting and running is about efficiency coupled with controlled power. So, when a non-track athlete say they can replicate the exact same feat as Usain Bolt after watching him clock a meager 9.93 in the 100 meter dash, is an insult to the sport of track & field. Here’s why. 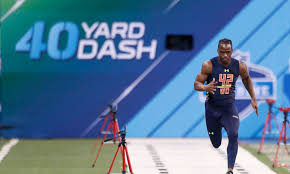 John Ross recently clocked the NFL’s fastest combine time in history with a 4.22 second 40-yard dash. That, in and of itself, is fast. However, he then goes on to claim that he can beat Usain Bolt in a 40-yard race. Given the conditions these football athletes had to endure during the combine (3 am wake-up calls, all day wait times, lack of proper nutrition) the feat is amazing. However, world-class sprinters endure the same amount of conditions (completely exhausting the body through multiple rounds in Olympic Games, non-stop 8+ hours flight time to over 20 competitions around the world, a season that lasts 11 months of the year, etc).

Just to completely disqualify the claim that Ross made about beating Bolt in the 40-yard dash, en route to Bolt’s first 100 meter victory in 2008 Beijing Olympic Games, Bolt clocked in 4.34 seconds at 40 meters, of the 100 meters he had to run. Not that intriguing, until you realize that 40 meters equals to about 44 yards. Another thing to remember is that in track, athletes must react to the gun, giving way to reaction time and actual movement. At the least, an athlete loses about a tenth of a second just to get moving. At the combine, the clock starts when the athlete moves. And to completely shut down the claim, collegiate sprinter Christian Coleman, who is about half a second behind Bolt in the 100 meter race, recently clocked a 4.12 second 40-yard dash, and in all honesty, he could have ran faster. Ross must first get through Coleman before he can step up to Bolt.

Based on a study by Sport Science, the foot contact, or how fast he can put his foot back down to the ground, was researched to be quick, giving reason he believes he can beat Bolt. That is great to know, but it is not the only factor to running fast. A foot can hit the ground fast, but it is the force developed through foot contact that determines speed. On average, world-class sprinters apply about 500 to 600 pounds of force into the ground on each step, in about a fraction of a second, for 40+ steps. Controlled chaos.

Maximizing effort as efficiently as possible is what track athletes do, whether in throwing, jumping, or running. There are reasons why elite track athletes only have about a month off between seasons, it takes time to develop and perfect the art. With respect to both fields, there are rare conversions between the two, and when there is, you leave out skills needed for either, and you become mediocre in both. There is much respect between the two sports, but when making claims about one or the other, numbers do not lie.